The War On Drugs: A Racist & Ineffective Approach

1986 was the year that we began seeing African Americans going to jail in numbers that made absolutely zero sense during country’s battle against cocaine that was named “The War On Drugs”. This was when our government passed two laws, one for crack cocaine and one for powder cocaine, with the intention of attempting to eliminate drug use and distribution, specifically of cocaine. However, the unequal punishments for the possession and distribution of these two forms of the same drug disproportionately affected the African American community, and only lead to mass incarceration of black and brown bodies.

The Crack vs. Powder Disparity 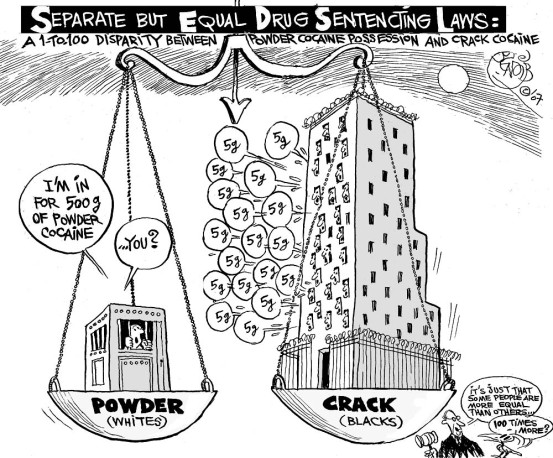 Under the Anti-Drug Abuse Act of 1986, those caught with just 5 grams of crack cocaine received an automatic minimum sentence, while it took 100 times that amount, 500 grams, of powder cocaine to receive the same punishment. This meant that people in minority communities, where crack cocaine was more prevalent, were disproportionately punished compared to those in predominantly white communities where powder cocaine was more common.

U.S. Senate Democratic Whip Dick Durbin has referred to this law as “one of the worst votes he ever cast,” and it’s pretty easy to see why as this disparity in sentencing had devastating consequences for the African American community.

The Ineffectiveness of the War on Drugs

Not only did the war on drugs disproportionately affect the African American community, it also turned out to be a rather ineffective approach to combating drug use. Despite stricter laws and increased incarceration rates down through the years, drug use has not decreased in the United States. In fact, the United States has one of the highest rates of drug use in the world, but discussing the reasons for that is another blog for another day. In addition to this, the war on drugs has also had negative consequences on public health. The criminalization of drugs has made it harder for people struggling with addiction to access treatment and support. It has also led to the proliferation of drug cartels and gang activity, as the illegal drug trade has become increasingly more & more lucrative for those who are willing to brave the risks associated with being a part of it.

A Better Approach: Decriminalization and Treatment

So, what can we do to address the issue of drug use and distribution in a more effective and equitable way? Many experts believe that the answer lies in decriminalization and a focus on treatment rather than punishment.

Understand, that decriminalization means reducing or eliminating criminal penalties for drug possession and use, and instead treating it as a public health issue. We have seen this approach actually be successful in countries like Portugal, where drug use and HIV transmission rates have decreased after the government implemented a decriminalization policy.

Treatment-based approaches, such as providing resources for addiction recovery and support, are shown to be more effective in addressing the root of the drug use as opposed to utilizing punishment as a deterrent.

In my opinion, these kinds of approaches prioritize the well-being and rehabilitation of individuals struggling with addiction, rather than simply punishing them for their actions. I think the more we can do to head that direction, as opposed to simply handing out more minimum sentencing, the better it will be for those who truly do need the help in defeating such a powerful addiction.

For more information like this, contact me to schedule one of my Cross Cultural Literacy Sessions for your church or business. You can also utilize my Recommended Resources Guide to see a list of recommended books, videos & articles that I’ve put together for those who would like to go deeper.